As the May Fair gets set to descend upon the streets of Hereford for its annual three day visit following the Bank Holiday, no doubt we’ll be complaining about the road closures and the noise. 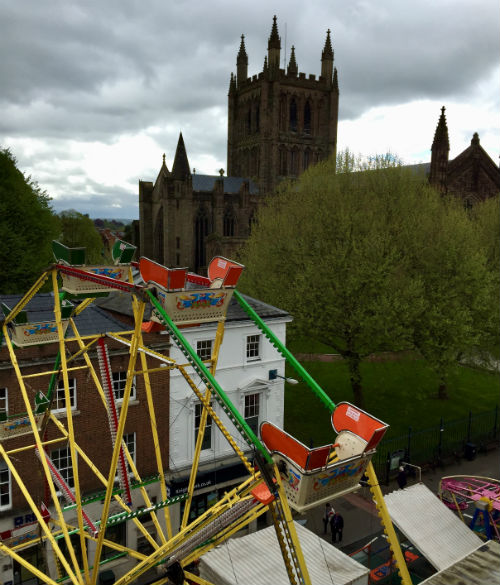 Today’s May Fair bears no resemblance to its origins back in the 12th Century, when it was known as St Ethelbert’s Fair and lasted for nine days.

It has evolved as technology has evolved and every generation of fair goer will have their own memories of it.  For my part, it brings back memories of candyfloss and toffee apples.  As a young child in the late 1960s my parents would take my brother and I ‘to the Fair’ on one of the three evenings, and we would walk from one end of it to the other taking in the sights – and smells!  I don’t recall going on any of the ‘big’ rides.  Instead we would go on the Carousel, throw darts, hook ducks (patience required) and try to win a coconut – I think my mother usually ended up having to buy one!

In the same way that technology has speeded up everyday living, so over the years the Fair rides have got bigger and faster, and today’s generation seek the thrill of it all.  But in amongst all the fast rides you can still find the gentler, more traditional pursuits, so if you go ‘to the Fair’ this spring – whether it be Hereford May Fair or some other – why not pause for a while amidst the noise and the bustle and simply hook-a-duck!

As the May Fair gets set to descend upon the streets of Hereford for its annual three day visit following the Bank Ho...