Metal detecting and the prospect of unearthing buried treasure is something that has always fascinated me. I wanted to be an archaeologist when I was at school but my teachers seemed less keen, so that was that. The rest, as they say, is history. 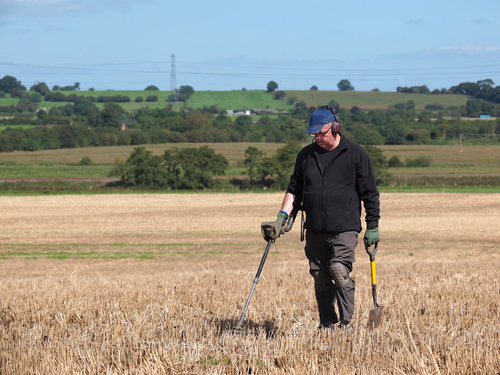 I have visited the British Museum in London many times over the years and marvelled at some of the finds that are displayed there, particularly the artefacts from the Sutton Hoo ship burial and the Mildenhall Treasure. The Staffordshire Hoard of Anglo-Saxon gold and silver is probably the most recent metal detecting hoard that I have been to see. Now that I have just begun my fifth decade, I am hoping soon to become the proud new owner of my very own metal detector. The fields of Shropshire await!

But what rules do I need to abide by?

First, the owner of the land, where I intend to use my metal detector must be contacted, and their written permission sought, to allow me to search with my detector on the land.

It is illegal to search on public or private land without permission, or to search on a designated area, such as a site of Special Scientific Interest. The National Council of Metal Detecting website has a model agreement which can be downloaded (ncmd.co.uk). Also, the National Farmers’ Union’s website has its own model clause for the use of NFU members. These agreements can help determine issues such as the area to be searched, and how any income received from a find will be split between the metal detectorist and the landowner (a potentially important consideration).

Second, follow the Code of Practice for Responsible Metal Detecting. All finds should be recorded with the Portable Antiquities Scheme.

Third, the Treasure Act 1996 redefined the meaning of “treasure” for England, Wales and Northern Ireland. In broad terms, “treasure” now includes all objects containing precious metal that were buried for any reason and are at least 300 years old. Failure to record a find of “treasure” could result in a fine and/or up to three months in prison. Finds must be reported to the coroner in the district in which it was found within 14 days.

The local finds liaison officer at your local county council can do this for you. If the coroner declares the find to be treasure, museums will have the opportunity to purchase it. The treasure is valued by the Treasure Valuation Committee and they recommend a figure to the Secretary of State for Culture. The museum pay that amount if the valuation is agreed and a reward (equal to the full market value of the treasure) is usually paid to the finder and/or the owner/occupier of the land.

If the reward is payable to more than one person, the Secretary of State will determine how much is to be paid to each, although it is usually split equally between the finder and the landowner (this is where a written agreement may come in useful). If a museum does not want to acquire the treasure, it can be disclaimed and given back to the finder or landowner.

Fourth, non-treasure finds are governed by the British Museum’s Portable Antiquities Scheme, where finders are encouraged to voluntarily record their archaeological finds. In the last 20 years the number of recorded finds – both treasure and non treasure– has increased exponentially. Apparently, about 95% of finds are discovered by members of the public and there are up to 10,000 regular metal detectorists. Again, a prior written agreement with the landowner will be helpful in determining what is to happen to any object found.

It is thought that there is a huge amount of treasure just waiting to be discovered and therefore there is no time to waste - I had better get that metal detector and start searching!

Metal detecting and the prospect of unearthing buried treasure is something that has always fascinated me. I wanted t...