I feel extremely privileged and honoured to be meeting with Mrs Nita Millington at her home in Staffordshire to talk about her early years as a member of the Women’s Land Army during the 1940s. Jan Graham, Mrs Millington’s daughter is also present. 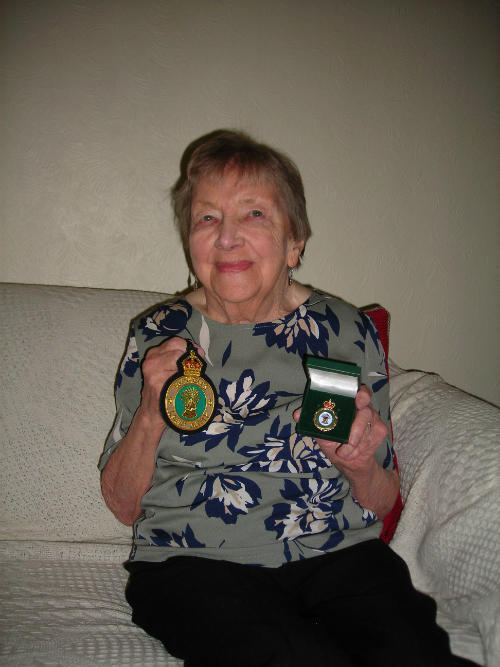 1  Do you come from a farming background?

No. I was born in Salford Manchester on 25 January 1925, the youngest of five daughters. My father worked for the Co-Op as a saddle and harness maker. At that time all their deliveries were made by horse drawn drays, his main job was to maintain the harnesses. My father died at the start of the war in 1939, I was 14 years old. I had passed a scholarship to go to the Girls’ High School with a view to further education at a secretarial college. The school was then closed and the children were evacuated to the country. My mother did not want me to leave even though Manchester and the surrounding areas were being heavily bombed, so I stayed at home with her. They were frightening times with too many near misses.

At 15 I went to work in a factory sewing raincoats, which was hard work. Then when I was 17 my mother died and I went to live with my married sister. I then started work in another factory sewing mine-sweepers’ coats and sou’westers. There were many occasions when I machined over my fingers and finger-nails. The work was very hard. The most arduous work was the waterproofing; this was mainly done by the biggest and strongest women in a basement cellar. The work entailed painting thick black dope, which was kept in huge tubs, onto the clothing.

2  How did you become part of the Women’s Land Army?

It became compulsory at the age of 18 and over for all girls without commitments (children or retained occupations) to join one of the services. I decided to join the Women’s Land Army as I liked the idea of working and living in the country. I had seen lovely smiling faces on the many posters and in the films at the cinema. Everything about the WLA looked happy and cheerful.

3  What year did you join and how long were you with the WLA?

4  Where were you based?

When I joined I was given a uniform and then sent to a farm on the outskirts of Manchester for a few Saturdays for training. I was then sent to work on Lord Chomondeley’s estate at a farm at Harmer Hill in rural Shropshire. I worked there until after the war ended. When the men started to return from the war to work the land they replaced the women and girls.

I was the only land army girl on the farm. I had lodgings at a house in the village. The farm was a few miles from the village so I cycled daily. There were hostels where a number of WLA girls stayed together or some even lived at home, this wasn’t an option for me due to the location of the farm where I was posted.

The lodgings were clean and reasonably comfortable, but quite basic. I was used to more modern conveniences, plumbing and electricity. In Shropshire it was quite different, no bathroom and an outside toilet. The only light was from oil lamps and the heating was a coal fire downstairs. It was very cold, so cold in the winter that the water in the wash jug in my room used to freeze. I kept my work clothes in my bed at night during the winter months to keep them warm so I didn’t have to put cold clothes on the next morning. The family I lived with were kind and I was well fed. As I worked on the land I had extra rations of cheese, sugar and butter which I shared with my host family.

I cannot remember how much I was paid but after paying my lodgings I had enough money to go out to the dance and cinema, whenever I could.

5  Did you work alone on the farm or were there other WLAs?

I was the only WLA on the farm; however there were two or three older women from the local village who worked on the farm. The older women did not have to join one of the forces or the war effort as they were all married, with families.

6  What were your working hours?

The basic working day was 8am to 5pm. The hours differed during harvest 8am until dusk or until it got dark. It was during war time that double summertime was introduced, which meant a longer working day as the evenings were lighter.

The farm was a mixed farm so work was varied. I did not do the milking but often mucked out the cowsheds and fed the calves.

8  What were your daily duties or were they more specific?

Depending on the season the work was varied. The holding grew sugar beet, mangle wurzels, potatoes and arable crops.

Beet was grown to produce sugar, the rows of plants needed to be weeded by hand using a long handled beet hoe. The beets were singled out by hand. When the crop was fully grown the beet was dug up and I had to go along cutting the green tops off the beet with a large knife (dangerous work). The root was then taken to the processing factory.

We used to have to spread manure on the fields; this was done by hand as there were no muck spreaders or machinery to assist with the process.

During the winter one of my jobs was sorting potatoes. The potatoes were stored in a big hod covered in straw and soil layer on layer. This was to protect the potatoes as they were stored outside. The hod was 30ft wide and 300ft long. I worked with the other women kneeling on sacks in the field sorting the good potatoes from the bad ones. Sometimes we wore gloves, but these soon got wet and muddy so quite often the work was done using bare hands.

I was sorting potatoes when I first set eyes on my husband to be when he came to work as a wagoner on the farm in January 1946. He was a natural horseman and very good with the horses.

I think hay making at harvest time was one of my favourite jobs, turning hay in the warm sunshine. When the hay was dry it was loaded onto the horse drawn carts using pitch forks. The hay was later stacked into hay stacks by hand.

The corn grown during the 1940s was much longer than the varieties grown today. The wheat grew to a height of five foot and the barley even higher at six foot, which was much taller than me.

When the corn was cut it was bundled into stooks and tied together with a long blade of corn. The stooks were then gathered and tied together with string. When they had dried they were fed into the threshing machine. The farm did not have a threshing machine of its own so one was brought to the farm once a year. As I was only short, it was my job to stand on the top of the threshing machine with a knife to quickly cut the string as the corn was fed into the machine. It was dangerous work, hot and tiring. The box were the corn was fed into was open and the sharp rotating blades could be seen below. The blades cut the corn into pieces separating the chaff from the grain. There was no guard on the box to prevent anyone from falling in to their death, which was not uncommon.

9  What did you find the most difficult?

My least favourite job was cutting curly kale with a knife in winter. The kale was often frozen and as it was cut the ice used to fall into my wellies. It was a cold laborious job.

The farm belonged to the estate of the very elderly Lord Cholmondeley, whom I rarely saw as when he visited the farm he only spoke to the farmer/Farm Manager Mr Jones. When the war ended I went to another farm at Harmer Hill. The farm was family run and belonged to the Mayalls which was run by Hugh & Richard Mayall. The Mayall family still farm in Shropshire at Pimhill Farm.

Mrs Millington says that she liked working for the Mayalls. Mrs Mayalls was fond of her and sometimes took her out, outings included going to the theatre.

11  When you finished with the land army did you stay in farming or did you pursue a different career?

My husband and I moved to Quarry Farm in Newport where he was offered a job as a farm labourer and wagoner. When Quarry Farm was sold we moved to Befcote to work for Mr Tomkinson.

12  Do you think the experience and time spent as a WLA helped to make you the person you are today?

As a naïve 17 year old girl I had no idea how my life would change. The work was challenging but provided me with a great independence which I have carried with me all my life. It also confirmed to me that I am and will always be a country girl at heart.

13  How do you think your time as a WLA girl would compare to the role of women in farming today?

There can be no comparison, in the 1940s safety was not an issue as it is today, and the work I did was dangerous. It was very hands on heavy work whereas today there is a piece of machinery to do all the back breaking work.

My work during the war was a big part of the government incentive ‘growing to feed a nation at war’. Farming today is more of a business.

14   Do you think agriculture has changed since your time as a WLA?

Yes, it has changed considerably, now it is a livelihood and business.

15  Do you see a future in farming for subsequent generations?

Yes very family orientated and more as a commercial business.

16  If you had your time over again would you still join the WLA?

Yes I would as I loved working and living in the countryside.

17  Do you still have contact with the Women’s Land Army?

Yes. In addition to attending the Armed Veterans Day Parade in Weymouth for quite a few years, health permitting, I have also attended, with my daughters Barbara and Jan, the annual WLA reunion and service at the Cenotaph in London each autumn for several years until the final gathering a couple of years ago. The service was followed by a most enjoyable lunch at Westminster School Hall for all Land girls who attended the reunion.

Barbara, Jan and I have also attended the WLA annual reunion near Brighton on a few occasions where we met and made friends with several former Land Girls.

I would like to thank Mrs Millington for a most enjoyable morning, sharing her memories with me. I would also like to thank her daughter Jan for providing a great deal of the back ground information.

I feel extremely privileged and honoured to be meeting with Mrs Nita Millington at her home in Staffordshire to talk ...