On Saturday 19 October I was fortunate to be invited to play in the Megan Baker House Golf Day, which was held at Leominster Golf Club. The Lanyon Bowdler team comprised of Colin Spanner, Giles Scott, James Jones and myself.

The weather had not been kind in the week before the event and I had expected it to be called off, but the course had held up well to the rain which had fallen and several teams played. Those of us who arrived with enough time to spare enjoyed a pre-game bacon sandwich in the clubhouse, which is in a great setting, overlooking the 18th green. 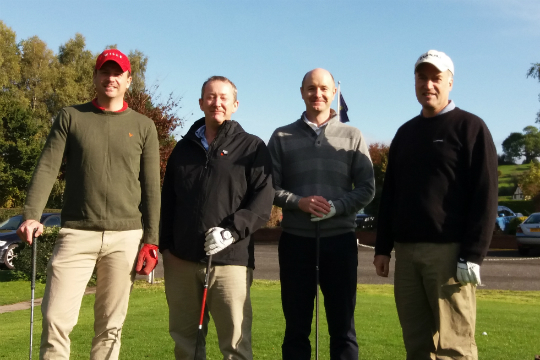 Despite all the rain we had had in the build-up, the weather on the day could not have been better, with bright sunshine and very little wind. Team Captain, Colin, played solidly as ever but was rather let down by the rest of us occasional golfers; perhaps when we reach Colin’s age we will have as much time to play as him and become a bit more consistent.

After playing it was back to the clubhouse for a well-earned drink and presentation of the golf prizes, none of which were collected by team Lanyon Bowdler. A raffle was also held and the day raised a superb £1,400 for Megan Baker House.

Megan Baker House is a charity that provides conductive education sessions for children and adults with motor disorders such as cerebral palsy, dyspraxia, Parkinson’s disease, stroke and acquired brain injury. They carry out an initial movement assessment of patients to determine whether they would be suitable for conductive education sessions. The aim of the sessions is to improve movement and ultimately independence.

Megan Baker House has a centre in Leominster and in the last couple of years opened another centre in Ledbury. They are entirely self-funding and run fundraising events throughout the year to cover the annual running costs of around £370,000.00. You can find out more about them and other fundraising events on their website.

A huge thanks goes to Lee Gough and all of her team at Megan Baker House for organising such a great event; we just hope we play a bit better next year.

On Saturday 19 October I was fortunate to be invited to play in the Megan Baker House Golf Day, which was held at Leo...