The team at Lanyon Bowdler’s Conwy office were recently invited to take a tour of Blind Veterans UK training and rehabilitation centre in Llandudno.

We as a firm are proud to have sponsored a group of local individuals in their challenge to walk the battlefields of the Somme, blindfolded in aid of Blind Veterans UK. The team of six from Sytner North Wales Audi (which includes two veterans) will be heading to France on 8 November, timing their trip to coincide with Armistice Day. They will embark on the trek over two days before paying their respects to the fallen on Remembrance Sunday and returning to Llandudno on 11 November.

The team from Sytner North Wales Audi will be driving from Llandudno to France and they recently attended Lanyon Bowdler’s Conwy office with their transport vehicles of choice, proudly bearing the Lanyon Bowdler logo. 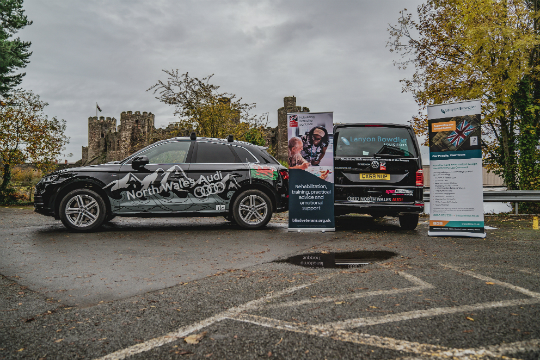 After a buffet lunch at our office, we climbed into the team’s (very comfortable!) Volkswagen Caravelle to be driven to Blind Veterans UK centre in Llandudno - a stunning building dating back to 1902 - for a guided tour conducted by the charity themselves. 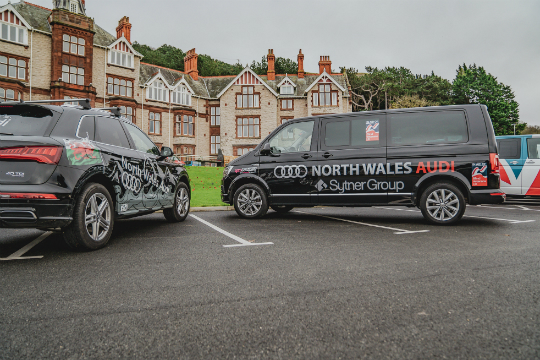 Upon arrival we were greeted by Suzanne Evanson, who deals with fundraising at the charity. Suzanne was accompanied by Billy Baxter, a veteran who lost his sight following service in Bosnia in 1997. Since the loss of his sight, Billy has gone on to achieve a host of impressive feats, from setting the blind solo world land speed record on a motorbike with a speed of 165mph, to appearing as a guest on the BBC television programme Top Gear and driving a lap of their circuit as the "Star in a Reasonably Priced Car". In 2014, Billy was appointed the official Town Crier of Llandudno, North Wales. To describe Billy as a force of nature would be an understatement; his positivity and enthusiasm for life is truly infectious and to spend time in his presence was an inspiring experience. 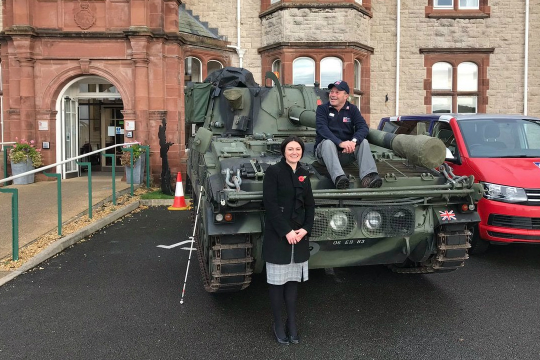 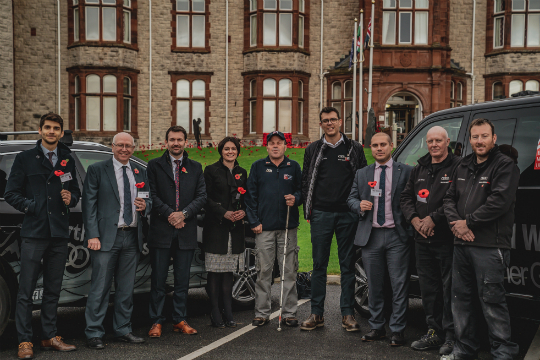 We then set off with Suzanne on a guided tour of the centre, where we were fortunate enough to meet more of the veterans as well as the staff and volunteers who work with them. Furthermore, several veterans (including Billy) are now employed by the charity in order to assist and train their fellow veterans.

The centre at Llandudno is available to veterans for holidays, respite, and nursing care. It has a variety of lounges, a bar, outdoor terrace, a fully equipped gym, a sports and activity hall, and an arts and craft workshop.

As well as helping with fitness and mobility, the centre also gives veterans with sight loss the skills they need to live an independent life. After visiting the hugely impressive great dining hall (suitably nicknamed the “Hogwarts Room”) we were shown around the ‘Training Kitchen’ where veterans are taught how to use appliances specially designed for those suffering from sight impairments. It was humbling to learn of the challenges faced by blind and vision-impaired individuals with everyday tasks we take for granted, such as filling the kettle to make a cup of tea or knowing what food is in each tin when preparing lunch. To learn the various methods used by the charity in ‘re-training’ veterans to carry out these daily tasks was truly heartening. 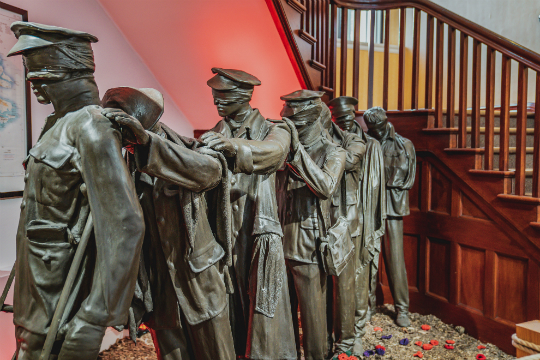 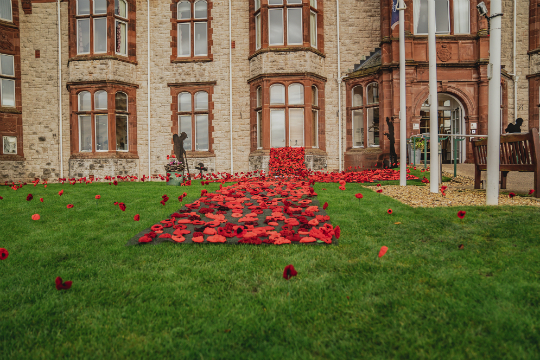 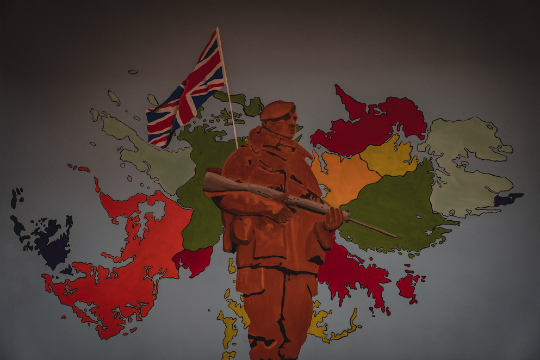 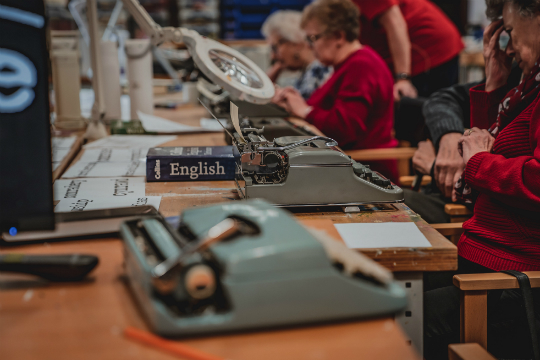 We left feeling inspired by the excellent work done by Blind Veterans UK, which relies entirely on external funding. Running the charity costs an astonishing £110,000 per day and we are hugely proud to be sponsoring the team at Sytner North Wales Audi in their fundraising challenge, donations to which can be made via their JustGiving page which is accepting donations until the end of March 2020.

Suzanne informed us that much of the charity’s fundraising relies heavily on legacies in wills, therefore if you would like to leave something in your will to Blind Veterans UK (or any other charity of your choice), then one of our specialist private client solicitors would be more than happy to assist you.

As a full service law firm, we know that armed forces personnel can be confronted with issues that can affect their day to day life. Lanyon Bowdler are proud signatories of the Armed Forces Covenant and our pledge demonstrates the firm’s commitment to helping those who are serving and/or, those who have served, along with their families, by offering our specialist legal advice.

The Armed Forces Covenant is a promise between the nation, government and armed forces themselves to help members of the armed forces community by ensuring they have the same access to government and commercial services, as well as access to products that other citizens have. This includes services such as help in finding a home, starting a new career and financial assistance. The Covenant is there to help any member of the armed forces, including family members, reservists and the bereaved. As to date, there are 4000 signatories to the Covenant including businesses of all sizes, charities, communities, local councils, central government and cadet forces who all honour their commitment to help and support the armed forces. 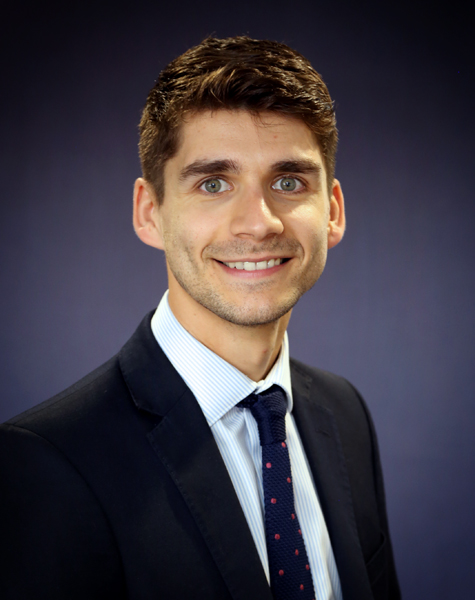